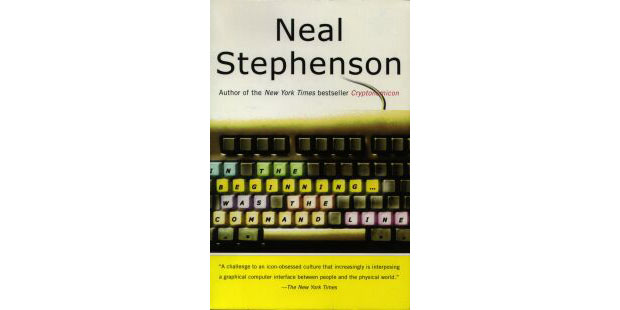 Times have changed every character but one in Neal Stephenson's classic. That one is Linux.

I was wandering through Kepler's, the legendary bookstore, sometime late in 1999, when I spotted a thin volume with a hard-to-read title on the new book table. In the Beginning...Was the Command Line, the cover said.

The command line was new to me when I started writing for Linux Journal in 1996. I hadn't come from UNIX or from programming. My tech background was in ham radio and broadcast engineering, and nearly all my hacking was on RF hardware. It wasn't a joke when I said the only code I knew was Morse. But I was amazed at how useful and necessary the command line was, and I was thrilled to see Neal Stephenson was the author of that book. (Pro tip: you can tell the commercial worth of an author by the size of his or her name on the cover. If it's bigger than the title of the book, the writer's a big deal. Literally.)

So I bought it, and then I read it in one sitting. You can do the same. In fact, I command that you do, if you haven't already, because (IMHO) it's the most classic book ever written about both the command line and Linux itself—a two-fer of the first order.

And I say this in full knowledge (having re-read the whole thing many times, which is easy, because it's short) that much of what it brings up and dwells on is stale in the extreme. The MacOS and the Be operating systems are long gone (and the Be computer was kind of dead on arrival), along with the Windows of that time. Today Apple's OS X is BSD at its core, while Microsoft produces lots of open-source code and contributes mightily to The Linux Foundation. Some of Neal's observations and complaints about computing and the culture of the time also have faded in relevance, although some remain enduringly right-on. (If you want to read a section-by-section critique of the thing, Garrett Birkel produced one in the mid-2000s with Neal's permission. But do read the book first.)

What's great about Command Line is how well it explains the original virtues of UNIX, and of Linux as the operating system making the most of it:

The file systems of Unix machines all have the same general structure. On your flimsy operating systems, you can create directories (folders) and give them names like Frodo or My Stuff and put them pretty much anywhere you like. But under Unix the highest level—the root—of the filesystem is always designated with the single character "/" and it always contains the same set of top-level directories: