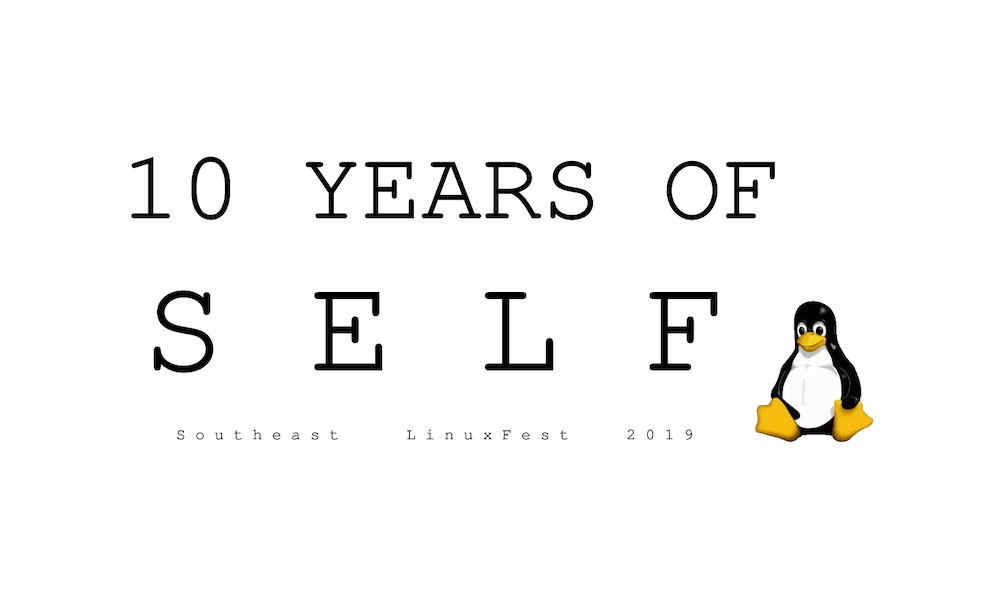 Highlights of the 2019 Southeast LinuxFest.

The tenth annual SouthEast LinuxFest (SELF) was held on the weekend of June 14–16 at the Sheraton Charlotte Airport Hotel in Charlotte, North Carolina. Still running strong, SELF serves partially as a replacement for the Atlanta Linux Showcase, a former conference for all things Linux in the southeastern United States. Since 2009, the conference has provided a venue for those living in the southeastern United States to come and listen to talks by speakers who all share a passion for using Linux-based operating systems and free and open-source software (FOSS). Although some of my praises of the conference are not exclusive to SELF, the presence of such a conference in the "GNU/South" has the long-term potential to have a significant effect on the Linux and FOSS community.

Despite facing several challenges along the way, SELF's current success is the result of what is now ten years of hard work by the conference organizers, who currently are led by Jeremy Sands, one of the founding members of the conference. Scanning through the materials for SELF 2019, however, there is no mention that this year's conference marked a decade of "Linux in the GNU/South". It actually wasn't until the conference already was over that I realized this marked SELF's decennial anniversary. I initially asked myself why this wasn't front and center on event advertisements, but looking back on SELF, neglecting questions such as "how long have we been going?" and instead focusing on "what is going on now?" and "where do we go from here?" speaks to the admirable spirit and focus of the conference and its attendees. This focus on the content of SELF rather than SELF itself shows the true passion for the Linux community rather than any particular organization or institution that benefits off the community.

Another element worthy of praise is SELF's "all are welcome" atmosphere. Whether attendees were met with feelings of excitement to return to an event they waited 362 days for or a sense of apprehension as they stepped down the L-shaped hall of conference rooms for the first time, it took little time for the contagious, positive energy to take its effect. People of all ages and all skill levels could be seen intermingling and enthusiastically inviting anybody who was willing into their conversations and activities. The conference talks, which took all kinds of approaches to thinking about and using Linux, proved that everybody is welcome to attend and participate at the event.