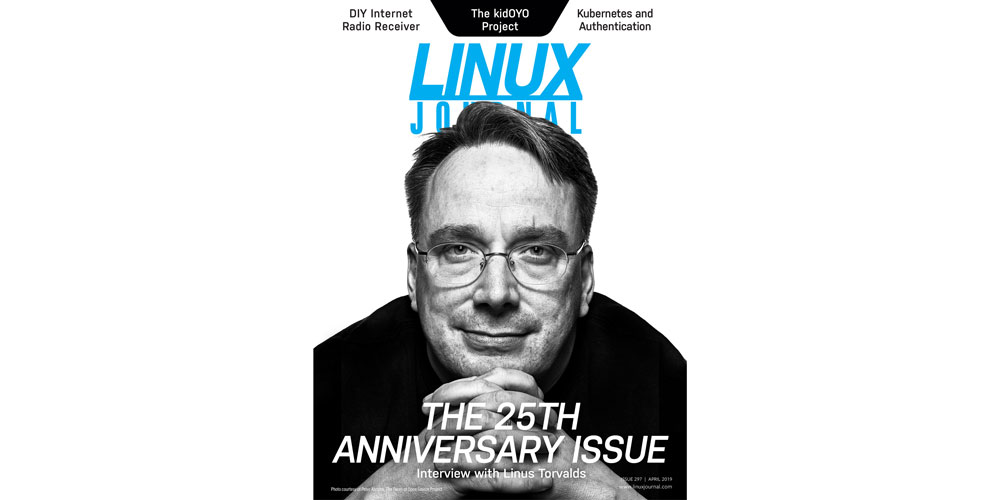 "Linux is an independent implementation of the POSIX operating system specification (basically a public specification of much of the Unix operating system) that has been written entirely from scratch. Linux currently works on IBM PC compatibles with an ISA or EISA bus and a 386 or higher processor. The Linux kernel was written by Linus Torvalds from Finland, and by other volunteers."

Thus begins the very first Letter from the Editor (written by Phil Hughes), in the very first issue of Linux Journal, published in the March/April issue in 1994...25 years ago—coinciding, as fate would have it, with the 1.0.0 release of the Linux kernel itself (on March 14th).

A quarter of a century.

Back when that first issue was published, Microsoft hadn't yet released Windows 95 (version 3.11 running on MS-DOS still dominated home computing). The Commodore Amiga line of computers was still being produced and sold. The music billboards were topped by the likes of Toni Braxton, Ace of Base and Boyz II Men. If you were born the day Linux Journal debuted, by now you'd be a full-grown adult, possibly with three kids, a dog and a mortgage.

Yeah, it was a while ago. (It's okay to take a break and feel old now.)

In that first issue, Robert Young (who, aside from being one of the founders of Linux Journal, you also might recognize as the founder of Red Hat) had an interview with Linus Torvalds.

During the interview, Linus talked about his hope to one day "make a living off this", that he'd guesstimate Linux has "a user base of about 50,000", and the new port of Linux to Amiga computers.

A lot changes in a quarter century, eh?

To mark this momentous occasion, we've reunited Robert Young with Linus Torvalds for a new interview—filled with Linus' thoughts on family, changes since 1994, his dislike of Social Media, and a whole lot more. It is, without a doubt, a fun read. (We're also republishing the complete original 1994 interview in this issue for reference.)

And, if you're curious about the history of Linux Journal, Kyle Rankin's "What Linux Journal's Resurrection Taught Me about the FOSS Community" provides an excellent—and highly personal—look over the last roughly 20 years of not just Linux Journal, but of Linux and free software itself. He even includes pictures of his ahem "super-leet Desktop from 1999". How can you go wrong?

Then we thought to ourselves, "How do we celebrate 25 years of talking about Linux?" The answer was obvious: by looking to the future—to where we (the Linux community) are going. And what better way to understand the future of Linux than to talk to the kids who will shape the world of Linux (and free and open-source software) to come.