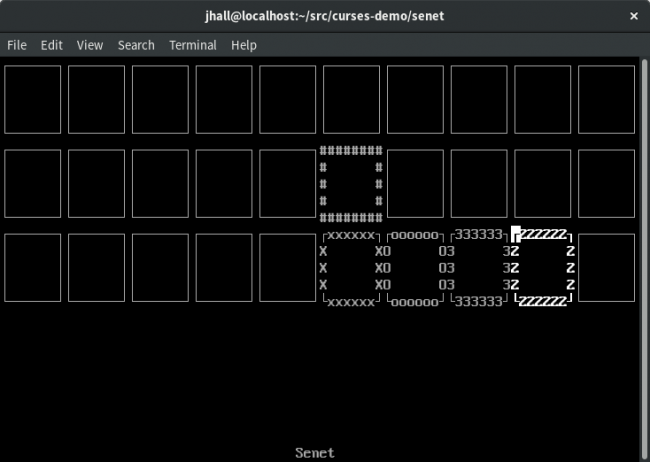 How to use ncurses to manipulate your terminal screen.

In my article series about programming for the text console using the ncurses library, I showed you how to draw text on the screen and use basic text attributes. My examples of Sierpinski's Triangle (see "Getting Started with ncurses") and a simple Quest adventure game (see "Creating an Adventure Game in the Terminal with ncurses") used the entire screen at once.

But what if it makes more sense to divide the screen into portions? For example, the adventure game might divide the screen to use part of it for the game map and another portion of the screen for the player's status. Many programs organize the screen into multiple parts—for instance, the Emacs editor uses an editing pane, a status bar and a command bar. You might need to divide your program's display areas similarly. There's an easy way to do that, and that's with the windows functions in ncurses. This is a standard part of any curses-compatible library.

You may associate "windows" with a graphical environment, but that is not the case here. In ncurses, "windows" are a means to divide the screen into logical areas. Once you define a window, you don't need to track its location on the screen; you just draw to your window using a set of ncurses functions.

To demonstrate, let me define a game board in an unexpected way. The ancient Egyptian game Senet uses a board of 30 squares arranged in three rows and ten columns. Two players move their pieces around the board in a backward "S" formation, so that the board looks like this:

Without the windows functions, you'd have to keep track of the row and column for each piece and draw them separately. Since the board is arranged in a backward "S" pattern, you'll always need to do weird math to position the row and column correctly every time you update each square on the board. But with the windows functions, ncurses lets you define the squares once, including their position, and later refer to those windows by a logical identifier.

The ncurses function newwin() lets you define a text window of certain dimensions at a specific location on the screen: