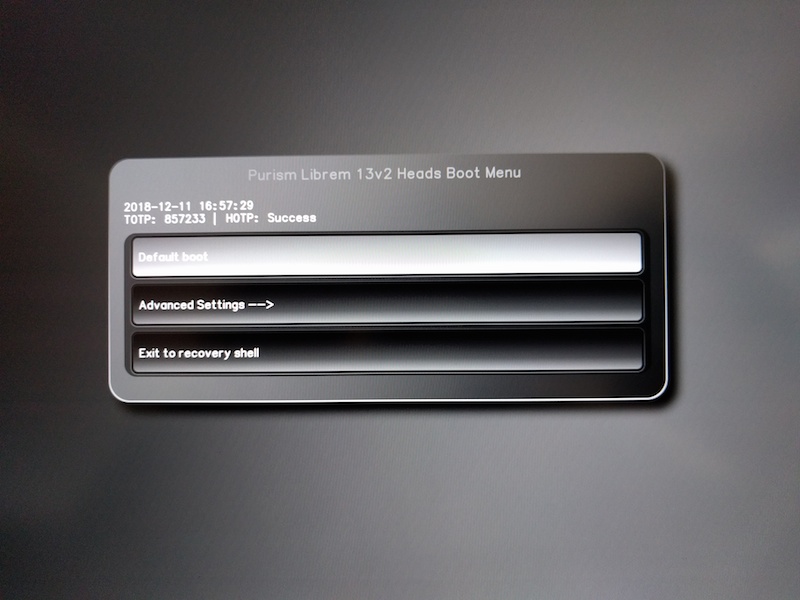 Learn about how the cutting-edge, free software Heads project detects BIOS and kernel tampering, all with keys under your control.

Disclaimer: I work for Purism, and my experience with Heads began as part of supporting it on Purism's hardware. As a technical writer, I personally find ads that mask themselves as articles in technical publications disingenuous, and this article in no way is intended to be an advertisement for my employer. However, in writing this deep dive piece, I found that mentioning Purism was unavoidable in some places without leaving out important information about Heads—in particular, the list of overall supported hardware and an explanation of Heads' HOTP alternative to TOTP authentication, because it requires a specific piece Purism hardware.

Antivirus software vendors ultimately added the ability to scan the boot sector for known viruses, so the problem was solved, right? Unfortunately, as computers, operating systems and BIOSes became more sophisticated, so did the boot-sector attacks. Modern attacks take over before the OS is launched and infect the OS itself, so when you try to search for the attack through the OS, the OS tells you everything is okay.

That's not to say modern defenses to this type of attack don't exist. Most modern approaches involve proprietary software that locks down the system so that it can boot only code that's signed by a vendor (typically Microsoft, Apple, Google or one of their approved third-party vendors). The downside, besides the proprietary nature of this defense, is that you are beholden to the vendor to bless whatever code you want to run, or else you have to disable this security feature completely (if you can).

Fortunately, an alternative exists that is not only free software, but that also takes a completely different approach to boot security by alerting you to tampering instead of blocking untrusted code. This approach, Heads, can detect tampering not only in the BIOS itself but also in all of your important boot files in the /boot directory, including the kernel, initrd and even your grub config. The result is a trusted boot environment with keys fully under your own control.

In this article, I describe some of the existing boot security approaches in more detail, along with some of their limitations, and then I describe how Heads works, and how to build and install it on your own system.