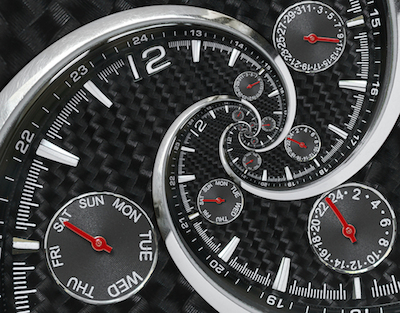 Dmitry Safonov wanted to implement a namespace for time information. The twisted and bizarre thing about virtual machines is that they get more virtual all the time. There's always some new element of the host system that can be given its own namespace and enter the realm of the virtual machine. But as that process rolls forward, virtual systems have to share aspects of themselves with other virtual systems and the host system itself—for example, the date and time.

Dmitry's idea is that users should be able to set the day and time on their virtual systems, without worrying about other systems being given the same day and time. This is actually useful, beyond the desire to live in the past or future. Being able to set the time in a container is apparently one of the crucial elements of being able to migrate containers from one physical host to another, as Dmitry pointed out in his post.

The kernel provides access to several clocks: CLOCK_REALTIME, CLOCK_MONOTONIC, CLOCK_BOOTTIME. Last two clocks are monotonous, but the start points for them are not defined and are different for each running system. When a container is migrated from one node to another, all clocks have to be restored into consistent states; in other words, they have to continue running from the same points where they have been dumped.

Eric W. Biederman supported this project overall and liked the code in the patch, but he did feel that the patch could do more. He thought it was a little too lightweight. He wanted users to be able to set up new time namespaces at the drop of a hat, so they could test things like leap seconds before they actually occurred and see how their own projects' code worked under those various conditions.

To do that, he felt there should be a whole "struct timekeeper" data structure for each namespace. Then pointers to those structures could be passed around, and the times of virtual machines would be just as manipulable and useful as times on the host system.

In terms of timestamps for filesystems, however, Eric felt that it might be best to limit the feature set a little bit. If users could create files with timestamps in the past, it could introduce some nasty security problems. He felt it would be sufficient simply to "do what distributed filesystems do when dealing with hosts with different clocks".

The two went back and forth on the technical implementation details. At one point, Eric remarked, in defense of his preference: