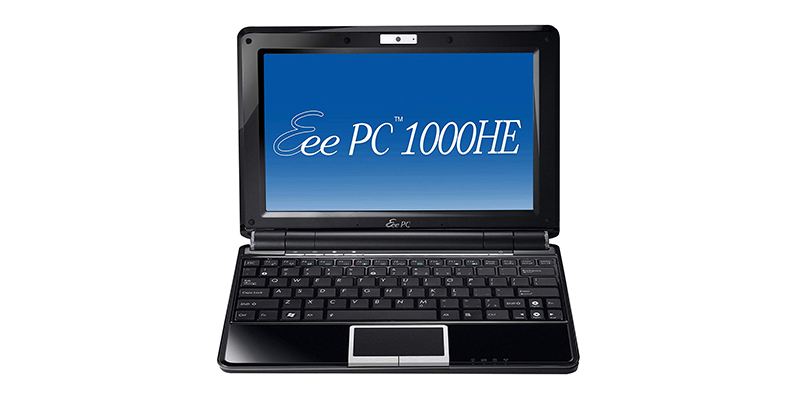 It was white, not much bigger than my hands held side by side, weighed about as much as a bottle of wine, and it came in a shiny, faux-leather case. It was the $199 Asus Eee 901, and I couldn't believe that a computer could be that powerful, that light and that much fun.

This is the story of the brief, shining history of the Asus Eee, the first netbook—a small, cheap and mostly well-made laptop that dominated the computer industry for two or three years about a decade go. It's not so much that the Eee was ahead of its time, which wasn't that difficult in an industry then dominated by pricey and bulky laptops that didn't always have a hard drive and by desktop design hadn't evolved much past the first IBM 8086 box.

Rather, the Eee was ahead of everyone's time. It ran a Linux operating system with a tabbed interface and splashy icons, and the hardware included wireless, Bluetooth, a webcam and an SSD hard drive—all in a machine that weighed just 2.5 pounds. In this, it teased many of the concepts that tech writer Mark Wilson says we take for granted in today's cloud, smartphone and Chromebook universe.

The Eee was so impressive that even Microsoft, whose death grip on the PC world seemed as if it would never end, took notice. As everyone from Dell to HP to Samsung to Toshiba to Sony to Acer to one-offs and "never-weres" raced netbooks into production, Microsoft offered manufacturers a version of Windows XP (and later a truncated Windows 7) to cram onto the machines. Because we can't have the masses running a Linux OS, can we?

"The Eee gave regular people something they couldn't have before", says Dan Ackerman, a longtime section editor at CNET who wrote some of the website's original Eee and netbook reviews. "Laptops had always been ridiculously expensive. The Eee wasn't, and it gave regular people a chance to buy a laptop that was smaller and more portable and that they could be productive with. I always gave Asus credit—they understood the role of form and function."

The computer world never had really seen anything like the first Eee, which didn't even have a name when it was launched in 2007 (although it later would be called both the 701 and the 4G). In fact, say those who reviewed the 701, it wasn't so much a product but a proof of concept—that Asus could make something that small and that cheap that worked.

There had been small laptops before, of course, like the Intel Classmate PC and the OLPC X0-1, each part of the One Laptop per Child project. But those were specialized machines designed to bring computing and the internet to students throughout the world, and not necessarily consumer products.