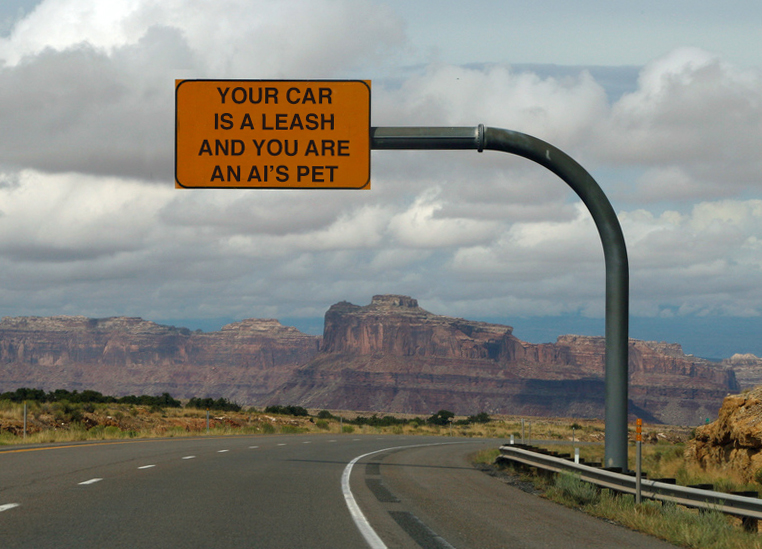 In an age when people are being re-engineered into farm animals for AI ranchers, it's the job of engineers to save humanity through true personal agency.

A few months ago, I was driving through Los Angeles when the Waze app on my phone told me to take the Stadium Way exit off the 110 freeway. About five other cars peeled off with me, and we became a caravan, snaking through side streets and back onto the freeway a few miles later. I knew Waze had to be in charge of us, since Waze is the navigation app of choice in Los Angeles, and it was beyond coincidence that all these cars took the same wild maze run through streets only locals knew well.

What was Waze up to here, besides offering its users (or a subset of them) a way around a jam? Was it optimizing traffic by taking some cars off the highway and leaving others on? Running an experiment only some AI understood? There was no way to tell. I doubt anyone at Waze could say exactly what was going on either. Algorithms are like that. So are the large and constantly changing data sets informing algorithms most of us with mobile devices depend on every day.

In Re-engineering Humanity, Brett Frischmann and Evan Selinger have dug deeply into what's going on behind the "cheap bliss" in our fully connected world.

What they say is that we are all subjects of techno-social engineering. In other words, our algorithmic conveniences are re-making us, much as the technologies and techniques of agriculture re-makes farm animals. And, as with farming, there's an extraction business behind a lot of it.

They say "humanity's techno-social dilemma" is that "companies, institutions, and designers regularly treat us as programmable objects through personalized technologies that are attuned to our personal histories, present behavior and feelings, and predicted futures."

And we are not innocent of complicity in this. "We outsource memory, decision-making and even our interpersonal relations...we rely on the techno-social engineers' tools to train ourselves, and in doing so, let ourselves be trained."

There are obvious benefits to "delegating physical, cognitive, emotional and ethical labor to a third party", such as Waze, but there are downsides, which Brett and Evan number: 1) passivity, 2) decreased agency, 3) decreased responsibility, 4) increased ignorance, 5) detachment and 6) decreased independence. On the road to these diminished human states, we have "fetishised computers and idealized computation".

Doing both means "we work on problems best solved by computation", which in turn leads to "the imperialism of instrumental reason and the improper assumption that all problems are comprehensible in the language of computation and thus can be solved with the same set of social and technological tools".